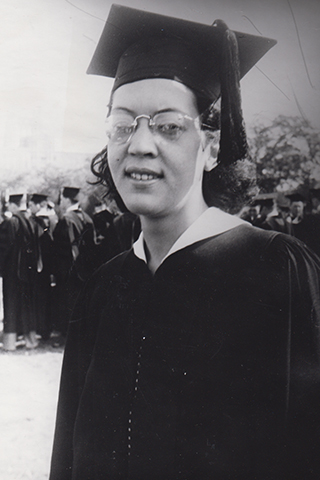 In 1940, Elizabeth Catlett became one of the first three MFA graduates from the University of Iowa and was the first African American woman to receive the degree. She would go on to become one of the most important American sculptors and printmakers of the 20th century.

On Sept. 7, the University of Iowa proposed to the Property and Facilities Committee of the Board of Regents, State of Iowa, that the new residence hall on Madison Street be named Elizabeth Catlett Residence Hall. The Board as a whole approved the name on Sept. 8. The new, 12-story residence hall is scheduled to open in the fall of 2017; it will command an impressive view of the Iowa River and house 1,049 students, making it the UI’s largest dormitory.

“Elizabeth Catlett’s achievements stand as a testament to the longstanding excellence of arts education at the UI and to the rewards of persevering in the face of daily obstacles,” says Tom Rocklin, vice president for student life, who assembled the proposal.

Catlett experienced discrimination throughout her life. In the early 1930s, she was rejected from the Carnegie Institute of Technology in Pittsburgh because she was African American, and when she taught high school in North Carolina, she was denied equal pay.

Although the UI accepted African American students during a time when many institutions throughout the country refused to do so, university housing remained closed to African Americans until Betty Jean Arnett desegregated Currier Hall in 1945.

While a student from 1938–40, Catlett lived off campus with Estella Scott, a local woman. She also lived for a year in a home sponsored by the Iowa Federation of Colored Women’s Clubs and at one point roomed with renowned poet Margaret Walker.

Catlett’s artwork has grown in popularity and is included in collections around the world, such as at the Metropolitan Museum of Art in New York City; the National Museum in Prague; the Smithsonian National Museum of American Art in Washington, D.C.; and the Palacio de Bellas Artes in Mexico City.

The UI acquired Catlett’s iconic Sharecropper print in 2002, and in 2006, Kathleen Edwards, senior curator at the UI Museum of Art, met with Catlett to arrange the purchase of an additional 28 prints for the UI’s permanent collection, some of which are on display in the Iowa Memorial Union.

“Catlett pursued her lifelong interest in African and pre-Hispanic Mexican art traditions, imbibing into them such positive and celebratory themes as African American motherhood, education, and civil rights,” Edwards says.

Catlett chose to attend the UI so she could study with Grant Wood, painter of the famed American Gothic, from whom she received the career-defining advice to “paint what you know.”

The grandchild of freed slaves and the daughter of a truant officer and a university instructor, Catlett frequently depicted women, mothers with children, and working class African Americans, as well as icons such as Malcom X, Angela Davis, and Sojourner Truth.

“I have always wanted my art to service black people,” Catlett told Samella Lewis in the book Art: African American, “to reflect us, to stimulate us, to make us aware of our potential.”

After receiving a grant from the Julius Rosenwald Foundation, Catlett visited Mexico, where she eventually took up residence and spent most of her life. She died in Cuernavaca in 2012 and is survived by three sons.

“We see in her sculptures and prints depictions of ordinary persons, sometimes engaged in everyday activities but nevertheless embodying in their expressive figure types a rough-hewn and resolute human spirit,” says John Beldon Scott, professor and director of the UI School of Art and Art History.

Catlett received the UI Distinguished Alumna Award for Achievement in 1996 and was named a UI Alumni Fellow in the College of Liberal Arts and Sciences in 2006.

Catlett donated proceeds of the 2006 UI Museum of Art purchase back to the UI to establish the Elizabeth Catlett Scholarship Fund, which each year supports an African American or Latino undergraduate or graduate student in printmaking.

The Art in State Buildings committee, which brings art into Iowa universities and public buildings, will look at options for acquiring public art by Catlett to display in the new residence hall.

Lena Hill, professor of English and African American studies and senior associate to the president, is excited by this possibility.

“Not only may UI students soon live in a residence hall named after a woman who was not allowed to live on campus because of her race, but they might also live with her art: the truest testament of her contribution to our legacy of creative excellence,” Hill says. “I think the UI is ready to engage both parts of the history Catlett’s achievements embody.”

The Board of Regents, State of Iowa, requires that all honorary names of facilities receive its approval.

Editor’s note: At the time of publication, the Board of Regents had not yet approved the proposal. Portions of this story have since been edited to reflect the Board’s approval on Sept. 8.